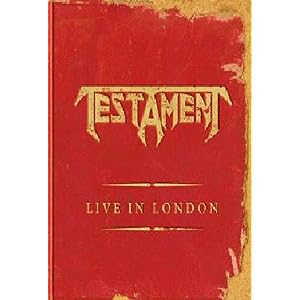 Testament’s excellent 2005 Live In London DVD is simply one of the best live DVDs that a metal band has ever put out, and even now both sounds and looks terrific.

In terms of visuals the digital camera look presents a great true to life image which makes the footage seem higher definition than it actually is. Elsewhere, the camera work and editing is all top notch and the whole concert is just fantastic to watch.

This combined with the audio mix, which suits the material and the gig perfectly results in a all round great viewer experience.

As for the concert itself, it simply couldn’t be better. The band reunite the classic 1980s line up of Chuck Billy on vocals, Greg Christian on bass, Eric Peterson and Alex Skolnick on guitar with Louie Clemente on drums (for half the set, with the first half being handled by Low-era drummer John Tempesta)

The band play a set list devoted entirely to their classic thrash-era material, with all the songs coming from the band’s first five albums. The band play many of their best songs like ‘Disciples Of The Watch,’ ‘Practice What You Preach,’ and ‘The Legacy.’

Even with all the fan service that the line up and set list represents, a concert is only as strong as the band’s performance and could still be terrible if the band are sloppy or their hearts aren’t in it. Luckily, the band are absolutely on fire and deliver one of the most energetic performances I’ve ever seen in a live DVD.

They seem so pleased to on stage and genuinely in to what they are doing and it subsequently comes across in the music, what you get is the electrifying sound of a band genuinely playing the absolute hell out of their instruments, with Chuck Billy engaging with the crowd at every opportunity, commanding the stage like an absolute master, so into the performance that he is playing air guitar (in a cynicism free way) and headbanging like a fan. This is the sort of performance that will win over non fans.

To conclude, Live In London is one of the best metal DVDs on the market, and I say that without hyperbole, even after all this time has passed since its release. Superb Audio Visual quality, Superb idea in the first place and finally a beyond-superb performance.