First off, a stupidly long intro to what The Scott Burns Project is.

I’d been listening to metal for many years before I began to really take notice of the impact the studio team has on a record’s sound. The first name that began to stick out regularly was Scott Burns, stalwart of Morrisound Studios in Tampa, Florida. That I liked the way Burns’ records sounded seemed less important to me after a while than how many of the bands I was really into at the time had made use of this guy’s talents to get their albums to sound a certain way. After a while, it got me thinking about what work he’d done outside of Roadrunner bands, hell, even for groups from outside America (Sepultura excepted, of course). About four summers ago, I began to hunt down as many Scott Burns-produced, mixed or engineered albums as I could and grouped them with those I already had, with a view to commencing a holistic study of where the appeal stemmed from. Then, as I so often do in the immediate wake of obsession, I forgot about it. In the four years since, tracks from those albums have bothered and delighted me in roughly even measure when appearing in shuffle playlists when I’ve been out and about or exercising, and I figured it was about time to finally devote the time to certain acts that deserved it (like Psychotic Waltz and Sean Malone) and banish others (including the interminable Assuck, covered in this very first double-length instalment). I’m not sure what I’ll get out of this, but if I were you I’d not expect it to be particularly insightful or even serious: though this is a journey of sonic exploration, it’s also a labour of love, and I intend on keeping it light-hearted as best I can. Let’s get stuck in with a band who share the dual honour of being the first on the list alphabetically and the first I wanted to get out of the way because of how often their hot stinking garbage 40-second tracks ruined a streak of great tunes when I was working out: Assuck.

The albums I’m listening to are 1991’s Anticapital and Misery Index from 1997. 1991 is held by some as the pinnacle of American Death Metal, and boasts more Burns albums than any other year, including several that rank as their respective band’s best work. It was a great time to be a death metal fan – the talent was eager and abundant and the general attitude of implied oneupsmanship resulted in the genre’s best-ever year. No-one told Assuck, I guess, because Anticapital is frankly unlistenable. This instalment’s review is likely to be as scattershot as the album itself, hiding as it does under the umbrella of ‘grindcore’ (like that WAS EVER A REAL FUCKING THING!), so forgive me if the following collation of thoughts seems less, well, organised than it should be.

First off, I’ll give it this: it has a really nice snare sound that’s different from the other 1991 Scott Burns albums, and lovely punchy bass drum kicks. On that point, check out Cannibal Corpse’s Butchered At Birth, Sepultura’s Arise and Cancer’s Death Shall Rise and tell me they haven’t all got the exact same snare sound. Anyway, a lot of the sound gets lost in the blasting. Assuck loves blasting. It’s a shame, and I guess a failure on Burns and co.’s part, but you’d be hard pressed to make out a lot of the actual riffs. The vocals sound like Barney’s from Napalm Death, which in turn sounded like Kam Lee’s. You’ll find the circle of influence is shorter in circumference than you’d think. Wow, that is a fuck ugly sentence. Anyway, Napalm Death. No! Assuck! Yeah, the drums on this album sound incredible, for sure. The drummer’s clearly the standout guy.

The whole album conjures nothing for me, though. No mental image. No emotion. No moments of awe at the musicianship. I can’t recall a single riff. The lyrics are incomprehensible, Though that’s an occupational hazard I guess. That’s like saying “screw you tiger, you’re FAR too orange and black”. 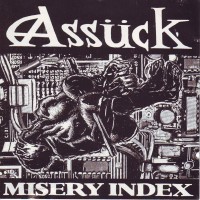 Grindcore. I don’t get the appeal of this genre at ALL. I imagine, maybe, that at a gig, full of your chosen elixir (in my case, Red Bull ON THE ROCKS), it might me good to fling yourself about to, but this music doesn’t scream “record me for posterity’s sake. THERE MUST BE EVIDENCE”. Anticapital’s not designed to make money either, like a lot of albums. “Like a lot of albums”. ! Like ALL ALBUMS! I can’t even imagine them playing the songs the same way twice. It’s not like prog-tricky or anything, it’s just like… I guess what I’m trying to say is it’s like Assuck the porcelain band sounds like someone dropped them on jagged rock. There’s no one great hook on the album to remember, let alone any section that lasts more than one go around. I think they might hate music, and their music is awful. In fact, it’s really fucking shit, if I was to be harsher about it, and I can say with confidence I’ll never listen to any track from this album ever again.

There’s an EP tacked on the end that produced differently and actually sounds better. The chaos sounds more organic here. Still, that’s like boasting how Lucky Charms turn your bum chunder green. Green or not, shite’s shite. It’s also remarkable how long 24 minutes (the duration of this disc) can feel when you’re not enjoying yourself. You know what I could have done in 24 minutes? Fuck, I could have watched “Bart Gets An F”. I could have watched one of the best 24 minutes in human creation. Goddamn you, Assuck. At this rate, 20 songs in, it occurs to me it would be genuinely beneficial had the band named the tracks 1,2,3,4 and so on. Riven? Come on. This is The Ballad Of The Gurgling Angry Man. 4. Fucking, FORTY.

It’d sound the balls if you were jamming but who wants to listen to a professionally recorded jam? Isn’t that the remit of pretentious aging rockers? (It is.)

Seeing as it’s so short, I moved on to Misery Index straight after, which is from late in Burns’ producing career where what the ‘Scott Burns Sound’ was was less clearly defined. Another opening minute of nonsense and I wonder how this band was able to keep making music like this for five years and not just get…bored. The songs are a little more sensible and there’re a few more cool moments (for those not keeping track, that’s a few more than zero).  I begin nodding my head as a coping mechanism. There’s no other way to function. Honestly, I considered this and I mean it, but you could torture fuckers with this music. I mean, correctly applied, you could torture fuckers with any music, but with this you wouldn’t have to add too much to it. I think, unlike Anticapital and Blindspot (the EP I mentioned), you’d stand a better chance of ‘getting into’ this album.

It doesn’t change things, though. If you like Assuck, you hate your ears.

Hmm. Inauspicious start. Just to make up for it, the next time, I’ll be listenening to Sepultura’s Beneath The Remains. Hey, peaks and troughs, right?