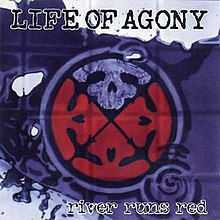 River Runs Red is the cult-classic debut full-length studio album by the underrated, unique New York band Life Of Agony. It was produced by Josh Silver and released in 1993 through Roadrunner Records.

The album is a concept album which tells the story of a confused and disillusioned young man with low self-worth and a poor support network, who ultimately decides to commit suicide. Its pretty grim, dark, weighty stuff. The story really sucks you in, and you find yourself hoping its not going to end in tragedy.

Musically, this album is a pretty interesting hybrid. There’s touches of Thrash Metal, Doom Metal, NY Hardcore and a big Type-O Negative influence at the same time. At times its almost sort of like Sick Of It All doing a St Vitus cover song, with Pete Steele on vocals. Not really, but that’s a ballpark idea of what to expect.

Album highlights include the speedy Title Track, the absolutely crushing opener “This Time” and the bitter introspective “Bad Seed.” If you wonder whether the album is for you or not, check out those three! That said, the whole album is rock solid, consistent from start to finish, and there’s no messing with tracks like “These Eyes” or “Method Of Groove” either. The only thing you’ll find yourself skipping are the three additional atmospheric tracks (each named after a day of the week) that provide the story but aren’t songs. Awesome for when you sit down and listen to it as a story, but missable if you just want to be bludgeoned by heavy music.

Overall; this album is an absolute monster. Relentlessly catchy, full of crushing riffs, a dynamic mix of speed and slow, powerful vocals and an interesting story. It’s a pretty unique record that no other band sounds like (and the band themselves would never repeat stylistically) and as long as you aren’t upset that it doesn’t fit neatly into one confined box, this album just gives and gives. It’s a grower, and the more spins you put in, the more magic you get back. In short – highly recommended.