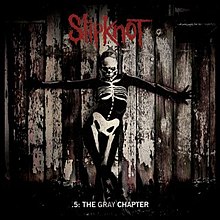 When I first heard and read about American Metal band Slipknot’s fifth major label full-length studio album, .5: The Gray Chapter, I was very skeptical. When I was a teenager, Slipknot were just breaking here in the UK and I got incredibly captivated by them. Every generation has that one band that just seems extra important, be it Maiden or Metallica or Pantera. The band you pay extra attention to, buy extra merch for, read extra articles about, pick up books about even when it seems unnecessary. That one band you just care way more about than everyone else. For me that band was Slipknot.

With the line-up changes – the replacement of unique drummer Joey Jordinson and the death of founding member and key songwriter Paul Gray with faceless un-named fill-ins who the band wouldn’t “count as real members,” – I felt a bit put-off. Would the band sound the same? Would the emotions result in an overly quiet ballad-filled record? Then the very not-to-my-tastes album artwork was unveiled and I felt even more put-off. That’s what you want your new album to look like? Really? I then read the reports that the album’s lyrics were all going to be about Paul, well, these circumstances collectively made me feel that this wasn’t going to be a tasteful affair. Coupled with all my obsessive reading about the band early in their career where they said that none of them would ever do drugs (which killed Paul and allegedly lead to Joey’s departure) and that they would only release four albums (this being their fifth) and that if one of them ever died they’d quit because it was all about “the nine” and nothing else, well… even though I’m older and smart enough to know its unfair and unreasonable to hold someone to something they said, probably only in passing, over a decade ago, somehow I almost felt that the band were doing the wrong thing by carrying on. The wrong thing, done without taste? – Didn’t exactly fill me with confidence.

Furthermore; upon actually getting the album, on my first few listens, I felt that this release was a bit of a cynical copy of the past two albums all over again – musically, and even structurally up to a certain point. You’ve got the intro (“Prelude 3.0”/“.execute.”/“XIX”), then that’s followed by the heavy opener (“The Blister Exists”/“Gematria The Killing Name”/“Sarcastrophe”), then the second heavy track with a clean chorus (“Three Nill”/“Sulpher”/“AOV”), then the first phase of the record is capped-off by the catchy radio single (“Duality”/“Psychosocial”/“The Devil In I”). All albums have an adventurous, slightly progressive weird track that appears clean but isn’t actually all that commercial (“Vermillion”/“Gehenna”/“Killpop”) and a heavy track late in the record to almost justify the lighter moments and defend against sellout accusations (“Welcome”/“All Hope Is Gone”/“The Negative One”).

The more I listen to it though, that sort of falls apart, and this album doesn’t feel like its trying to redo the previous two records. It feels more like its trying to balance them within the overall discography, and blend them with the first two records. “The Devil In I” may have the chorus and catchiness of a radio single, but the verses are slow dark and creepy, more akin to “Skin Ticket” or “Gently” than they are to “Duality.” The way some of the riffs work towards the end of “Skeptic” and “Lech” feel closer to the mechanics of the riffery to “New Abortion,” “Metabolic” and “My Plague” than anything more recent. “The Negative One” has that same blunt ugliness that made “The Heretic Anthem,” “(Sic)” and “Everything Ends” so good. “Custer” in particular feels like its trying to recapture some of the madcap energy of their debut, with vocal performances, screeching samples and keg-strikes that feel violent and wild. Even the sombre album closer, “If Rain Is What You Want” doesn’t feel like another ballad ala “Circle” or “Snuff” but rather, it feels like a menacing, creepy, atmospheric closer. Sonically, its nothing like “Iowa” of course, but it is somewhere close in spirit.

Its actually quite a neat idea the band have gone for here… rather than just redoing the winning formula that allowed them to headline arenas at last, they’re taking what worked about both the more aggressive roots and the commercial but still good “headliner era” and mixing the two together, making all of it fit together more cohesively. I really respect that. Ok; so the stylistic shift worries are no-longer a problem, and I realize that complaining about the album artwork is petty, and consequently have gotten over it. So that’s no-longer a problem either.

The new drummer also does a reasonably good job of copying Joey’s unique, flappy and skittery sounding drum style that previously seemed inimitable. Its not an exact match, but it sounds “like Slipknot.” That’s a major worry gone right there. Heck, they don’t even try and hide the bass. The bass is still prominent. People made sure it wasn’t too different, but not an exact copy. It works.

Just as I had read, the lyrics do certainly concentrate a bit on Paul and his death. Its full of lines like: “This song is for the dead,” “No one is bullet proof,” “Some of us are destined to be outlived,” “The world will never know another man as amazing as you” and “Life keeps taking things away” among others. At first, the chorus of “Skeptic” in particular made my nose wrinkle a bit, with its sweary sing-along tribute to the late Paul that felt needlessly cheesy and therefore a rather poor treatment for a fallen band-mate. Not so fast, nose! It really isn’t though. I don’t think the lyrics are anywhere near as cheesy as I feared. Listening to the intro track “XIX” on repeat, I came to the conclusion that the lyrics to this album are actually really heartfelt and honest, and do feel appropriate given how (Corey and Shawn in particular) the band do speak in real life. This feels like a very true-to-life, non-linear document of the confusion and contradictory emotions that grief and bereavement evokes in us, in real life. Thinking about it in this new light, the album has a depth and weight to it that is surprisingly impressive.

This album is full of catchy choruses, fun riffs, great dynamics, solos that don’t intrude upon the songs, memorable percussion all around, enough of the noisy electronics and DJ-scratches that you want from this band and best of all… conviction. This album is driven. It has a point to prove and is all the better for it. Anything that seems dumbed-down and mass-friendly is revealed to be darker, uglier, heavier and more complex than it first appears. Everything that could feel phoned-in instead feels intense. The album is full of hidden depths, interesting extras, and superb balance between fast and slow and light and heavy. Its not just a good album under the circumstances, or a good Slipknot album, it’s a good album period. Infinitely better than I cynically expected and a genuine “can’t put it down” type of exciting, that will rack up an enormous play-count in a short space of time.

Its hard not to feel excitement and satisfaction as the songs defiantly reclaim my waning interest in a band that used to be so massively definitive to my early music-listening years, and who played such a large part in the formation and shaping of my music-fandom. “The Negative One,” “AOV,” “Custer,” “Sarcastrophe” and “Lech” are cemented firmly in any future Slipknot playlist I’ll ever make, and it’d take a heck of a lot to get them out. Overall; It feels good to be able to say the new Slipknot album is fantastic.