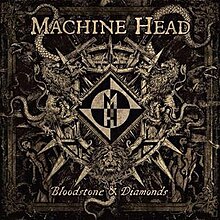 It was their first without longtime bassist Adam Duce (a huge part of the band’s sound) and the first with new bassist Jared MacEachern. This line-up shift leaves frontman Robb Flynn as the sole original member. Luckily long-time drummer Dave McClain is still on board as he has been for everything except the debut, and Phil Demmel is still there as he has been for the last three exceptionally good albums, leaving a feeling of consistency and cushioning the blow of such a big loss.

Produced by bandleader Robb Flynn & Juan Urteaga, mixed by Colin Richardson (with additional work from Andy Sneap and Steve Lagudi); sonically, this is an exemplary record. The instruments are crystal clear, the mix is crushing and well balanced, and this only serves to highlight the superb, passionate performances and some of the best vocals in the band’s history. Its a real treat for the ears, as violins swirl warmly around and the gorgeously-recorded drum kit hammers proudly across the spectrum.

When I first got into the band, public opinion had turned on them, every magazine and website claimed they were on the way out, people spoke of them either with contempt or with rose tinted nostalgia and an “only Burn My Eyes was any good” historic revisionism. It nice to see how much the band’s star is on the rise now. Every album keeps getting better. They keep getting the recognition they deserve from critics. Live shows are full of adoring fans. This even ended up being, to date, the band’s highest charting record ever.

It deserves it. This is one stone-cold gem of an album. Almost flawless. There’s no filler, no weak songs, nothing out-of-place. The choruses are memorable. The solos are scorching. The fills are impressive and satisfying. The album is chocked full of riffs that sound like all eras of the band’s history and still move things forward to the future. There’s a bouncy scrappy Hardcore-influenced sound to “Game Over,” a haunting epic feeling to “Sail Into The Black,” a melancholy melodic feel to “Damage Inside” a big dirty sludgy sound to “Beneath The Silt” and more rampant Blackening-esque Thrashy aggression to the likes of “Killers & Kings” and “Eyes Of The Dead.” The titanic 71-minute record is full to the brim with all different sorts of ideas and directions but still feels like one cohesive whole.

The quality of the songwriting tips everything over the edge. Its not just immaculately produced, furiously performed and stylistically satisfying… but its also just plain brilliant in and of itself. It stands up remarkably well to repeat listens. All the little clever structuring decisions, neat flourishes and all the orchestral extras reveal themselves more and more with repeat listens. There’s an immense depth to this one. I’ve seen over half of it live in concert and it absolutely crushed and felt “right” beside stuff from all positions in the band’s discography. It felt incredible even without the lush production and the extra orchestral instruments. These are just brilliant songs, plain and simple.

It must have been difficult to live up to the impossibly high standards the band have been setting themselves for the last twelve-or-so years, but somehow Machine Head managed it, once again. This is an incredible record that will stand up well against any Machine Head record you care to name. Get yourself a copy if you haven’t already!