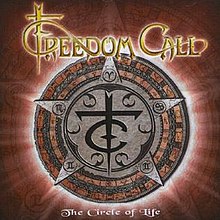 Freedom Call – The Circle Of Life

After releasing three brilliant studio albums of pure, happy-sounding Melodic Power Metal between 1999-2002, the German band Freedom Call decided to spice things up a little bit. Consequently; their fourth studio album, 2005’s The Circle Of Life is something of a transitional affair, seeing the band keep one foot in the early sound that defined them, and stepping out towards their Hard Rock influenced sound of their later material.

The Circle Of Life features more keyboards and less guitars during verses for example. The keyboard sounds used are less piano-sounding and more artificial and ‘80s sounding. The tempos are frequently more midpaced than the focus on speed the band had previously. The production is that little bit slicker and more commercial. Every song sounds like a single.

It could be easy to call this album a sell-out or overproduced or something along those lines, if it weren’t for the fact that its brilliant. Yes, The Circle Of Life sees Freedom Call experimenting with new ideas rather than rehashing their beginnings, but doing so without compromising on quality. If you like Power Metal bands’ big singles more than the thrashier deep cuts then this is a perfect album for you.

I guess “new ideas” is a relative term though, as ‘The Gathering’ may sound like something off of Emerson Lake & Palmer’s Works album and ‘Kings & Queens’ may blatantly steal the riff from Ozzy Osbourne’s Bark At The Moon. Regardless, The Circle Of Life sees the band in fine form, delivering fine songs. Its shinier, more polished and more varied… but in a way that makes you think of the word “mature” rather than “mistake.”

Highlights include the stomping ‘Hero Nation’ which has a fun marching feel and some of Chris Bay’s most evocative vocals to date, as well as the fun album opener ‘Mother Earth’ which doesn’t sound like your average Freedom Call tune and the album-closing Title Track. Well, that could just as easily be anything in the second half… This albums got that thing that Eternity had, were it just gets better as it goes on!

Overall; The Circle Of Life is a damn strong, damn enjoyable album. It isn’t a clone of the seminal debut Stairway To Fairyland, but its equally worth your attention. Turns out the band are great at more than one style. Great band, Great album. Check it out.