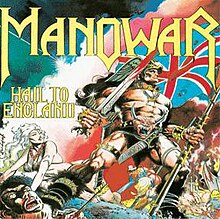 In 1984, two years after their debut album Battle Hymns was released, and in the same year as their fourth full-length Sign Of The Hammer, the legendary American Heavy Metal band Manowar released their third studio album Hail To England… a record that pays tribute to the country in which they formed the band and found an early fanbase, as well as introduced to the public the affectionate nickname for their fans “The Immortals.”

Manowar’s debut had a bit of a ‘70s Hard Rock flavour to it in places, and their sophomore record Into Glory Ride was mostly a bit slower, doomier and more progressively inclined. By the time of Hail To England, Manowar had decided how to balance all of their various influences into one cohesive and uniquely Manowar whole. It contains all the sword and sorcery imagery, self-referentialism, vocal virtuosity, loud bass and OTT extravagance that make the band who they are. Just like all the early Manowar records it has complex awkward drum patterns and a unique sense of rhythm that makes for really interesting listening.

Opening with the now-classic ‘Blood Of My Enemies,’ ‘Each Dawn I Die’ and ‘Kill With Power’ (as covered-by Arch Enemy), the band make a really solid Side-A with no weak links, any song from which could fit well in a concert or hits collection. Try any of these tracks if you wonder if the album (or indeed the band) is right for you.

The three-minute bass solo “Black Arrows” sets the trend for future Manowar releases with their multiple solos (be it bass, guitar or drum solos). It also ends with the lengthier, slower, more progressively inclined ‘Bridge Of Death’ which is ambitious, bombastic and reminiscent of their direction on their previous record.

Overall; Hail To England is a strong record by the band, and contains some of their best material from the early days. This is quite a popular album for the fanbase. (Personally; I enjoy it a lot, although I feel the best was still to come from the band and enjoy the band’s later efforts like Kings Of Metal, Triumph Of Steel and Louder Than Hell even more. This for me is the band finding themselves, and those are the band perfecting it.) If you take it too seriously or use the word ‘cheesy’ a lot when describing music you dislike then maybe avoid, but if you’re in the mood for fun sweaty macho ’80s Heavy Metal then jump in with both feet.