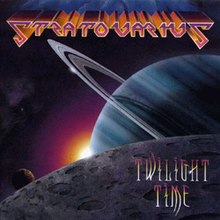 Back in 1992, Timo Tolkki was in the process of transforming the underground Heavy Metal band Stratovarius into the world renowned Melodic Power Metal band known and loved today. This was before virtuoso singer Timo Kotipelto, drummer Jörg Michael and former Yngwie Malmsteen keyboard hero Jens Johansson joined the band.

Their second album called Twilight Time (or II) is one of those albums that there’s nothing wrong with, but you don’t feel excited about either. I can’t think of a single negative thing to say about any track individually, but as an album its never going to be my favourite. Maybe it’s all a bit too midpaced, maybe the production is too reverby, or maybe I just miss Kotipelto, I don’t know, but this record just doesn’t get my excitement up all that much.

There are some interesting standout moments, such as the strong opener ‘Break The Ice’ which has a sort of ‘Mountain King era Savatage feel, and the rhythmic instrumental ‘Metal Frenzy’ (interestingly less frenzied than some of their later instrumentals, more controlled and mechanical if I’m being pedantic).

If you’re a Stratovarius fan then of course check it out, give it a chance, and give it enough listens to sink in, but in my opinion this is the definition of for-completests-only. I wouldn’t recommend anybody pick this up as an introduction to the band (who would go on to such greater things) and I don’t even think there is a hipster like-the-old-stuff contingent out there who’d like it just because it had a different line-up and didn’t receive much promotion.

Overall, its ok. As I’ve said, there’s nothing wrong with any track, there’s no poor tracks and nothing I’d call filler, its just… ok.