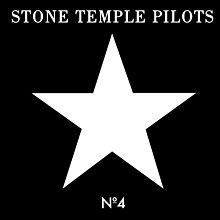 With their fourth album, No. 4, the band made their heaviest album since their debut album, but it was a rather different kind of heaviness… it owes more to early Nu Metal and Groove Metal in places than anything on their debut ever did… sort of like how Silverchair did on Freakshow. Now, that being said, this is not a Nu Metal or Groove Metal album by any stretch, it is still a Grunge album and it still has some of the janglepop and prog and psychedelic influences found on their previous two records as well.

Songs like ‘Down,’ ‘No Way Out,’ ‘Sex & Violence’ and ‘Pruno’ are nice fat heavy numbers, mid-paced and heavy with a Sabbathy groove. They balance it nicely with softer moments like the hit ‘Sour Girl,’ the whimsical album-closer ‘Atlanta’ and the excellent bouncy little ‘60s pop influenced number ‘I Got You.’ Very much an album of two halves.

The album has a certain reputation of not being as good as the band’s early work, but for me, I find it equal to any album previous. I even like it better than Purple if I’m being totally honest.

I always like when Grunge goes a bit more on the Metallic end and a bit less on the noisy dissonant end, so this is a bit of a guaranteed gem for me. Its not just the style that does it for me however, the quality of the songs is incredibly high here… little to no filler, memorable hooks, catchy riffs and big beats…what’s not to like? To top it all off, I just enjoy the vocals a heck of a lot. They’re one of the few bands outside of Hakken and Blind Guardian who I’ve ever heard with a discernible Gentle Giant influence in the vocals and that just does it for me every time.

Overall; Like Stone Temple Pilots? Get yourself No. 4. Or give it a listen again if you’ve got it already.