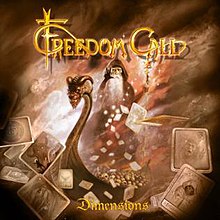 Freedom Call released one of the Power Metal subgenre’s absolute finest albums with their seminal debut album, Stairway To Fairyland… a flowery, melodic, ridiculously happy spin on the Keeper Of The Seven Keys formula that rivalled the likes of genre milestones such as Somewhere Far Beyond, the aforementioned Keeper’ and Glory To The Brave in terms of quality and enjoyability.

Five albums into their career, several line-up changes later, in 2007, the German band released the concept album Dimensions. It saw something of a stylistic shift. Each of their previous albums was an evolution of the sound that came before, but this was the biggest and most pronounced change to date. The Freedom Call sound could always sort of be seen as sort of analogous to Keepers era Helloween, or Land Of The Free era Gamma Ray, but on this album they seem to be going for the sound of the big Derris-fronted commercial singles… y’know, tracks like ‘Live Now,’ ‘Mrs God’ and ‘Mr Torture’ … those sorts of commercial, Hard Rock meets Power Metal tunes, that aren’t so speedy or virtuosic or metallic, make a lot of appearances on Dimensions. The songs ‘Mr. Evil,’ ‘The Queen Of My World’ and ‘Blackened Sun’ are particularly noteworthy examples of this.

Change their style they may have done, but let up in quality they clearly refused to. Dimensions is a pretty strong album. ‘Magic Moments’ for example is equal to anything on their early records, it may have a strange The Cure’s Love Cats sort of feel to it, but its damn good fun!  The album closer ‘Far Away’ takes a sort of Bruce Springsteen vibe, throws in bagpipes and jumbles that all together with the Freedom Call sound… sounds like a mess in theory, but seriously, if it doesn’t make you smile when you actually hear it, you must be having a bad day!

I can see how some fans might jump ship on this album, and how some potential fans may be put off; It’s a wizards & demons themed concept album set in the future taking already flowery music and making it even more commercial and saccharin… “how cheesy can you get?” etc. …but for me it is worth the money and well worth the time. No its not brutal, no its not traditional but yes, yes it is good!