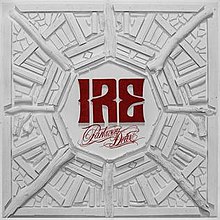 Man, this album was a big surprise. Australian Metalcore band Parkway Drive had been releasing consistent, easily identifiable records with a definite style that they wouldn’t deviate from too much, they had a style that they worked within and had absolutely perfected.

With their fifth full-length studio album, Ire, Parkway’ take their rulebook and throw it to the wind. This is the biggest stylistic shake-up in the band’s history by a country mile. This album is fresh, exciting, radically different than what’s came before. Its such a big difference that you can almost expect the cries of “sell out!” to slither out of your speakers themselves. The thing is, this doesn’t feel like a sell-out, its just an invigoration, a refreshening, and a new twist on things.

There are some seriously different atmospheres and a very different vibe to it than you may have been used to before. The songs are brighter, catchier, more sing-along focused, there are more concert-baiting backing vocals, there’s more stomps and clap noises and there’s way more melody. It is a strange mixture of the band going in a Traditional Heavy Metal or Power Metal route… with much more bright major-key dual guitar melodies, as well as going in a groove or almost Nu Metal direction, with almost rapped vocals and some seriously rhythmic music. Its like constantly flipping between Machine Head’s The Burning Red and then The Blackening, with Parkway Drive’s masterpiece Deep Blue being interjected every so often. Imagine Parkway Drive covering Five Finger Death Punch and Iron Maiden in a medley – that’s a vague ballpark of the sort of directions this experimental album almost evokes, if not actually sounds directly like.

In terms of musicianship Parkway have always been excellent but the virtuosity on show here is next-level. Vocally, this is the most melodic and expressive Winston McCall has ever been. Lyrically, this album is continuing on from their previous album Atlas, but sounding even more vital, important and interesting without ever feeling preachy or finger-wagging.

Its almost difficult to call out stand-out moments, because every song is different than the last, there’s so much going on, so many songs that would be the best song on their peer’s album, so many moments that rip a huge smile across my face, that the album as a whole is just astounding.

At the time of writing, my favourite songs might just be the absolutely anthemic feel-good tune ‘Vice Grip’ which sounds like the final scene in a sports movie, the massive groovy rhythmic scream-along ‘Crushed’ which feels like it was written in 1999, and ‘Vicious’ which has the best guitar of Parkway’s career to date – and when Winston starts going on about burning it all to ash, you feel where he’s coming from.

If you thought Parkway Drive were just going to rehash old ideas, you thought wrong, variety is the key theme here. Interestingly though, they’ve managed this without compromising themselves, it still sounds unmistakably like Parkway Drive. It is little touches they’ve done before stretched out to whole songs, or traditionally Parkway sounding bits but with bongos underneath, or just focusing on one element of their sound more than others.

Overall; If you are deathly afraid of melody, catchiness, or hand-claps…and you don’t want anything on your music to sound any fun then by all means avoid this album… but for everyone else, Parkway’ have released a game changing, barn-storming, absolute rager here, and if you like this sort of music at all you seriously need to check it out. Its an album that makes me smile and feel genuinely enthusiastic and I can’t recommend it enough.