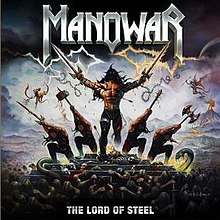 2012’s The Lord Of Steel was the American Heavy Metal band Manowar’s 11th full-length original studio album proper. It doesn’t experiment too much with the formula, it is the sort of default Manowar sound for anything since Kings Of Metal, but with less orchestration and fewer ballads than a lot of Manowar records. Perhaps it was a reaction against the direction of 2007’s Gods Of War album or something, but the majority of this album is just meaty, substantial, catchy Heavy Metal songs, in a mixture of tempos and even things which start off threatening to be ballads have big distorted riffs and doomy hanging chords by the end. It revels in the meat-and-potatoes stuff. And it does it well.

Now, I know that Manowar might be a joke to some in the music community because of the sweaty loin cloth imagery and death-to-false-metal warcries associated with the band… but musically, if you like bands like Judas Priest, Saxon or Iron Maiden at all, it is worth giving them a try. It doesn’t ever really matter about anything non-musical as much as the music itself and this band knows how to make Heavy Metal sound good – plain and simple. If you like steady, pounding drums with double-kicks, melodic guitar solos, vocals with charm and character, fantasy lyrics and NWOBHM meets Power Metal flavoured riffing, then this is an album that will suit you. Opener and title track ‘The Lord Of Steel’ pretty much sums it all up, if you wonder whether the record is for you, give that a quick listen first and it will tell you everything you need to know.

Where does this fit in with the rest of their catalogue? Well, I wouldn’t argue that it is the single greatest effort in their entire career. It is unarguably in the top 50% of their discography though. I can think of other records I like better, but I wouldn’t write this one off as a forgotten late career release “for-diehards-only” until you’ve listened to great songs like ‘Born In A Grave,’ ‘Expendable’ and ‘Hail Kill And Die’ first! …If you want to get yourself in a good mood, stick on ‘Touch The Sky’ let go on inhibitions, and just give in to it. You’ll feel like a glorious hero for a brief moment when that absolutely delicious guitar solo kicks in.

Overall; DiMaio, Adams, Logan and the now-returned early drummer Donnie Hamzik have released a steady, solid, smooth and almost-perfect gem. If there could be any criticism made, it might be that it is so slick that the performance perhaps lacks a bit of urgency or fire, but otherwise, this is such a finely crafted and easily enjoyable album. If you like the band, don’t miss out on it!