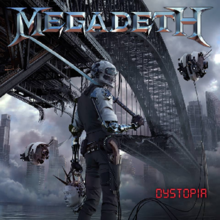 Well, for those fans looking forward to a blistering ‘holy cow’ return-to-form story, there may be some disappointment. Despite the interesting new band line-up with Angra’s Kiko Loureiro and Lamb of God’s excellent drummer Chris Adler; Dystopia, Megadeth’s fifteenth full-length studio album is not necessarily the career highlight that hype and wishful thinking may have lead us all to believe.

The new lineup is great and not gimmicky, but its still the Mustaine show here on Dystopia. Band-leader Mustaine still writes a huge percentage of the music, so despite the line-up, it doesn’t suddenly sound much like Angra or Lamb Of God either, although you can definitely pick up on their involvement during breakdowns or solos if you’re paying attention.

With that out of the way, Dystopia is a good album. Of course it is. It’s a Megadeth album that isn’t Risk, of course it’s a good album. Its more or less the same Megadeth album that the last four ones have been, with about the same level of similarity and difference as each of the last four have had with each other. Its slightly heavier than 2013’s Supercollider, its slightly more consistent than 2011’s Thirteen and slightly thrashier than 2007’s United Abominations, but when all is said and done, its relatively similar to them all, especially the less famous mid-album stuff. 2009’s Endgame is arguably the closest record to this stylistically in the Medageth catalogue; thrashy yet modern, ‘fast’ on paper but still varied and with plenty of mid-tempo moments, energetic and revitalized but not necessarily earth-shattering. They’re arguably quite similar in quality too, as well as stylistically.

If you’ve enjoyed Megadeth’s recent output, this is good. Its good for me, I’ve been really keen on all the recent albums personally. If you only like a particular period such as the ‘80s or ‘90s however, I’d give up now because despite the hype there’s not that much difference here to anything the band have turned-in since the millennium.

There are a few interesting moments here and there, such as a touch of piano and spoken-word at the end of ‘Poison Shadow’ or some Spanish guitar at the beginning of the instrumental ‘Conquer Or Die’ but again, nothing you haven’t heard before from a band with such a long and storied career as Megadeth …who have covered a lot of ground already in their time. Apart from having a cover of Fear’s ‘Foreign Policy’ at the end, which admittedly fits in well thematically with the majority of the rest of the record’s tone anyway, the album doesn’t particularly have any stand out moments or obvious hits, it isn’t an album of highlights and filler, it feels very consistent, and benefits from being absorbed in a single listening session rather than picked and chosen from. That’s a good thing though, this is a good album that works well as an album, that is good all the way through and that feels like a complete ‘whole.’

With all of that being said, its then understandably hard choose favourite tracks from Dystopia; for me ‘Lying In State’ is one of the strongest, a track which sounds very close to the style of the faster stuff on 2004’s The System Has Failed, and has lead guitar lines that don’t sound much like any previous Megadeth material. Another noteworthy track would be the fun, bouncy ‘The Emperor’ which feels like the better Thirteen material and would sit rather nicely beside ‘Whose Life Is It Anyway?’ in concert.

Overall; Dystopia is another post millennial Megadeth album of strong quality that satisfies on every level, but that probably won’t go down in the history books. The guitars are sharper, the vocals have more snarl and the lyrics are a bit more politicized than Supercollider for example, but I think ‘business as usual’ is a fairer summation of the record than ‘best album since…’ because, for me at least, Megadeth have been dishing out high quality, enjoyable, entertaining albums of this quality all along.