Oh hey, haven’t seen you in about, oh, two years. I’ve been busy. Busy reading Batman. I think I had about thirty Batman books when I last wrote one of these and now it must be close to double that, or even more.

Anyway, for a long time, I avoided this book. I wasn’t a big fan of A Death In The Family, and was a bit resentful of things like magic, zombies, aliens or anything unrealistic in comic books. Yes, I know its stupid. Batman fights monster men, plant women, flying bat mutants, monsters made out of shape-shifting clay and crazy futuristic technology like jetpacks and ice-guns but no, lazarus pits are just too-weird. A bit hypocritical, ey?

Well, in the year or more since I’ve last written I’ve read all sorts of wacky shit like Batman Odyssey set in a world beneath the earth’s surface with a goblin versus dinosaur war and have come to think of this as fairly grounded by comparison.

Batman – Under The Hood: 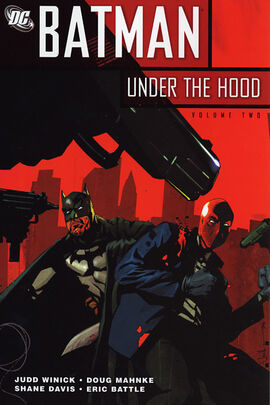 – Story: A new violent vigilante, themed around the Red Hood (hey, remember that from Killing Joke?) comes to town and murders a lot of criminals. Black Mask is the king of crime and has teamed up with others such as Mr. Freeze, Deathstroke and The Society. Batman and Nightwing fight Amazo, a robot with all the Justice League’s powers programmed in (sort of like what happens in Endgame except its a robot). It turns out Red Hood is actually a ressurected Jason Todd, the former Robin who died in A Death In The Family, brought back to life by Infinite Crisis nonsense and guided by Talia Al Ghul. He’s evil now. He’s mad at Bruce for not avenging his death by killing the Joker. There’s a lot more to it than that, but go read it. Or, hey, watch the movie adaptation which is arguably the best Batman movie.

– Art: Absolutely great. The Matt Wagner covers are amazing, just as great as the Dark Moon Rising ones. The actual Mahnke interiors are pretty much perfect. Better than almost any of the big trades of the era. Better than No Mans Land or Broken City or War Games or even Batman & Son (although I’d call that the beginning of a new era). Its a fine mix between cartoony and realistic and pretty much as close to comic book perfection as you can imagine.

– Tone: An interesting mix. The Amazo stuff is very cartoony. Jason storming the gangsters and murdering them is more like a Netflix superhero show. The Infinite Crisis nonesense is all the worst in comic books. The bit where Bruce talks to Clark about ressurection from death is the best of comic books.

– My Thoughts: Ok, so first off. We’ve had bad vigilante goes on killing spree before. I mean, Knightfall has Azreal-as-Batman going too far. There was that story before that with the female anti-rapist vigilante, there is the guy from Prey who is a killer vigilante, there is ‘remember to say the catchphrase of… The Reaper!’ and many more. I think there was one in A Loney Place Of Dying too maybe, my memory is fuzzy at the moment. Heck, even a lot of Batman’s problems with Huntress are exactly that.

Second of all, there’s two things I hate in any story more than anything else, which is firstly adding something new in to the past and pretending like it was always there (cough cough, Hush and Court Of Owls), and the second and most galling is ressurection from death. No one should ever come back from the dead. No one ever. As such, the very premise of this story is everything I stand against.

Overall then, I should dislike this story, because its yet another violent vigilante story, with a return from the dead plot. What a recipe for a stinker.

What actually happens is that its one of the most creamy, easily readable, quick and pulpy and enjoyable comics of the whole era. Its arguably a must-have. Its also notable for introducing Red Hood back into the mythos which brought some great moments such as in Morrsion’s Batman And Robin arc, and then as an ally in The New 52. I really love Jason in Eternal and Robin War and love interactions between him, Dick and Red Robin. I know a lot of people really hated that stuff and couldn’t wait for it to die in flames, but people like different stuff and I don’t care if some people don’t like God Hates Us All, its still Slayer’s best album for me and no one can ever convince me that anything on Hell Awaits is even a tenth as good as Disciple, Payback or Warzone.

So yeah, even if what it added to the mythos was something I hate (ressurection from death, that totally removes the stakes of death so much that Damian could come back to life half a fart’s duration after he died) the way it handles it is good and the moments that resulted from it were pretty entertaining.

I also like this whole little bit of history when Black Mask was the biggest bad guy, being a sort of combined Two Face, Joker and Penguin in his role as mob boss, bruiser and horrific terroriser all at once.

Would I recommend this? Absolutely I would. I’d also recommend the movie version, its not a straight copy, but its pretty faithful at times.

Would I recommend God Hates Us All, also absolutely I would. I mean, it doesn’t have Mr Freeze in it… but then what Slayer album does. [Undisputed Attitude actually, but that’s a technicality].