This was my second Saxon gig, and indeed the second Saxon gig I’ve attended at this venue. I really like this venue, its farther away from my house than the Apollo or Academy, but has much better sound and feels a bit classier. I remember seeing Queensryche here and it was one of my all time favourite ever gigs.

Last time Saxon were supported by the theatrical and bizarre band, Hell, but this time it was just the sort of appropriate greasy NWOBHM you’d expect. No not Grim Reaper (although that’d be an amazing booking…somebody get Steve on the phone!). Firstly Girlschool took to the stage, leaning heavily on material from the first two albums, plus the critically acclaimed new album, Guilty As Sin, that’s been on the sidebar of Blabbermouth for most of the year. I enjoyed Girlschool a lot. They played their cover of Gun’s ‘Run With The Devil’ (Judas Priest fans would recognize that). The ended with ‘Emergency’ which of course every Motorhead fan would recognize. It was a good gig, a lot of fun, ramshakle energy, smiles all around, jokes about throwing the lead guitarist into the crowd, amusing attempts by the lead guitarist to strum the rhythm guitarist’s guitar. Very entertaining and a great way to warm us up. I’ll check out more Girlschool as a result of this. I was going to anyway during my recent second NWOBHM phase, but spent my money on Tokyo Blade and Bitch’s Sin instead. I’m spotifying them as I write this anyway. Good stuff. They’ve won me over.

Last time I saw Saxon, I took my fiance (who doesn’t listen to Metal) along as a social experiment. Hell’s frontman whipping himself while dressed as the devil on stilts accompanied by spooky lighting and the band playing music that sounded a bit like Cradle Of Filth kind of scared her off so I was solo this time. This allowed me to venture closer to the front, however, for a better view and different atmosphere this time creating a nice distinction between the two times I’ve seen em. The front made you feel more engaged with the actual band, like as if Paul Quinn or Nibbs were looking you personally in the eyes, and it all seemed very perfect until along came some very largered-up people who where bouncing around, elbows everywhere, much to the annoyance of the more music nerd and young kid demographics, but I kept thinking, its a Metal show, not a library, let them have their fun. Now in all honesty; I’d personally rather just geek out on drum porn, but some people need beer and bouncing to enjoy a concert so I shouldn’t be a wet blanket. [I ended up wet due to beer spillages by aforementioned bouncy larger fans, but not necessarily a blanket…]. I dunno, sometimes I wish everyone was as boring and dorky as me, and just wanted to sit tongue hanging out watching the drum parts and guitar solos lustily, but as long as the rowdiness is good-natured and they’re not deliberately targeting people who aren’t into it then I guess I’m not going to be mr. sour about it. Sure Saxon themselves were famously tea-total, but its a loosing game complaining about beers at a rock show. May as well hand back your copy of Back In Black and Paranoid now and head to the new age isle.

Anyway. Girlschool got things revved up. Next was Fastway, y’know, Fastway? …featuring Fast Eddie Clark of Motorhead fame. Technically a NWOBHM band due to timing and marketing although not really in terms of sound. Their singer sounded really like Glen Hughes (and had the same Soul influenced vibe). They were very entertaining. And y’know…. its Fast Eddie Clark. Like, if a town you went on holiday to had a Lemmy or Phil Lynnott or Bon Scott or Dio statue or something like that, you’d go visit it, wouldn’t you? Similarly, just seeing this iconic guy in real life just felt like a special moment. I’m not a super sentimental guy with regards to this stuff. When Dimebag or Dio or Paul Gray died, they didn’t become gravestone tattoos on my body or even facebook user profile pics on my account, I don’t post anywhere near as many RIP posts on this blog as I feel I maybe ought to, but at the same time, when the only living member of the Bomber-Iron Fist line up of Motorhead is in your eyeline, it feels pretty cool I can tell you.

Finally, the main event. The mighty, the magnificent, the one and only Saxon. They battered…um excuse me… the Ritz with their opener, the title track from their excellent newest album, ‘Battering Ram.’ The setlist was really cool. Last time I went to see em, it was a celebration of the classic trilogy (Wheels Of Steel through to Denim And Leather), with songs from the first and fifth album in their too, making it early-days focused. Not content with just repeating the same setlist again, they focused a bit more on modern times tonight. There was plenty off of Battering Ram, as well as some selections from Inner Sanctum, Sacrifice (ok they played that last time too but I’m tryna make a point here) and Killing Ground. 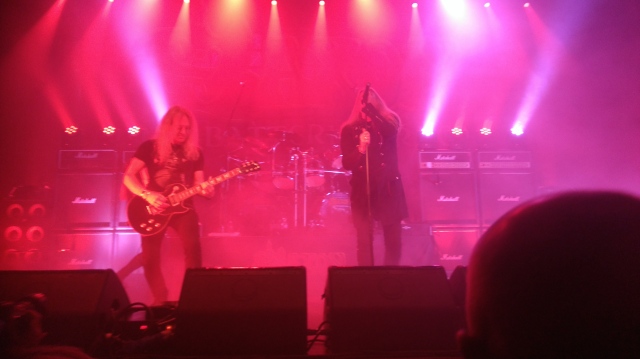 There were of course all the amazing gems you can’t do without, such as a breathtaking rendition of both ‘Crusader’ and ‘The Eagle Has Landed,’ and all the sing-along classics you’d expect like ‘Dallas 1PM,’ ‘747 Strangers In The Night,’ ‘Wheels Of Steel,’ and double-of course they closed with the eternally fun ‘Princess Of The Night.’ I’ve said before about how the ”take it easy take it slow don’t look back don’t let go” section of ‘Eagle was astonishing live and tonight didn’t disappoint. The drum fills in particular just set if off!

A surprise moment was when they announced that they had meant to tour with Motorhead but it got cancelled when Lemmy passed away (I still remember a few years ago having tickets to Saxon & Motorhead in my 2nd year of uni and it got cancelled when Lemmy got diagnosed with diabetes… poor Lemmy) and then proceeded to invite Fast Eddie up on stage for a cover of ‘The Ace Of Spades.’ Hey, nice surprise, seeing Fast Eddie play Ace Of Spades with my own eyes. And its not even the early ’80s! And I’ve been born! Wow, didn’t expect that. A very welcome bonus to the evening indeed.

There was plenty of smiles to be had throughout the show. For example, Biff declared Solid Ball Of Rock ”one of our MANY comeback-albums” and it really had me grin in a spinal tap way. There was also a technical fault during ‘Stand Up And Be Counted’ and ‘Never Surrender’ where the speakers went all weird and it slowly got fixed over time, but the band of course, never surrendered. Yes I did just write that. I’m sorry. Moving on…

Highlights for me, as before, where almost all from Nigel Glockler. Yes, I do have a massive drummer’s crush on him. Nigel just plays with such verve, passion and authority and absolutely elevates the whole band. The material from his own era is pounded out like nobody’s business (those kicks on ‘Let Me Feel Your Power’ and ‘Attila The Hun’ … you felt them in your intestines!) and the material from previous drummers is so greatly improved, with extra cymbal chokes, surprise splash cymbals or little ride-cymbal’s-bell patterns and indeed with much better fills. His playing doubles or triples how good the already great band are (I mean its flipping Saxon, its hard to make em better, but Nigel is just that magnetic and incandescent that he manages to do it anyway). He’s also a cool guy, specifically throwing his drumstick to a younger crowd member who was really into it and knew all the words and fills, rather than rowdy drunken yahoos just because they’d been fans longer…. I really reacted to that for some reason.

Another fun highlight was when a crowd member threw their patch-jacket (or kutt or battle-jacket or whatever you call them in your town) on stage and Biff put it on and wore it for a few songs before returning it to the correct person. Pretty cool moment. I mean, if the band who wrote the line ‘Denim and leather brought us all together’ wearing a fan’s denim on stage isn’t cool to you, then maybe you shouldn’t be reading my blog. I write about heavy metal not about antique china patterns or crossword hints.

It was a pretty amazing gig, the sound was brilliant (speaker malfunction not included), the vocals were remarkably good, the drums…well of course they were brilliant… did you not just read me gushing?, the attitude and showmanship of the band was perfection itself. The setlist was the perfect balance of wouldn’t-want-to-miss-it and try-this-on-for-size and although not every pet favourite track can get played at every concert (hey, I’m dying to see ‘Battle Cry’ and ‘Everybody Up’ live) it was an absolutely corking gig and set of songs and I loved every minute of it.

That’s twice now Saxon have brought the thunder. If they come my way again you better believe I’ll be up at the front again. If they come to your town you’d be a stark raving idiot to miss them. People who find a way not to enjoy that live show must be very devoted in their pursuit of actively choosing to not have fun, because it seems next to inconceivable from where I’m sitting that the mighty Saxon would be in the same room as you without producing smiles, fist pumping, and a lasting impression. Get tickets now, people!

[Side note: I wasn’t absolutely flat broke this time, and got to walk away as the proud owner of a very nice Saxon Est. 1979 t-shirt with the Eagle logo. I think I’ve found my new favourite shirt. I haven’t found such a perfect to my tastes metal shirt since the C.O.C Deliverance-reunion] 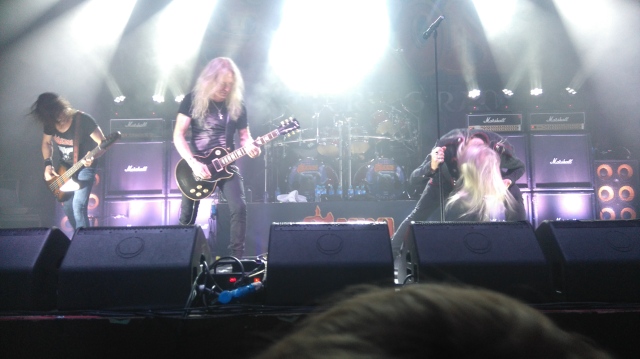