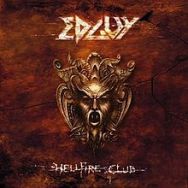 Edguy are a Power Metal band from Germany, headed up by Tobias Samet (also known for Avantasia), and Hellfire Club is their sixth album. The 2004 effort is one of their best in terms of enjoyability and quality, and is interesting in their discography looking back, as it serves as a bridge between their Power Metal early days and their Hard Rock tinged later days, and also sees the band’s silly side come a bit more to the fore.

There are some very fine Power Metal moments on here, and there are some very fine Hard Rock-ifed moments. There are also some tracks that balance them both, in a mature and semi-progressive way similar to their previous album, 2001’s Mandrake, most notably the ten-minute ‘The Piper Never Dies.’ Its sort of a great midpoint between their various different styles and ambitions without being too far in any one direction and therefor it is very originally Edguy without any influences hanging obviously off sleeves.

The production job on the album is very big and radio ready, matching the stadium-focused choruses that have started to find their way in to the music. A huge memorable chorus like that of single ‘Lavatory Love Machine’ (a song about ‘the mile high club’ with a comic lyrical style) sounds gigantic on this record. Its a far cry from the thin and wirey dueling guitars of classics from Theater Of Salvation (a production style perfect in its own right, but for very different music). The band are fleshed out by a guest orchestra which gives things a bit of extra depth and bombast.

Highlights include ‘Down To The Devil’ which has a fiendishly catchy chorus, as well as the foot-to-the-floor ‘We Don’t Need A Hero’ which is one of the better tunes on here and the guitar work is noteworthy. Lastly, the cheesily-titled ‘The Rise Of The Morning Glory’ which I feel is the exact mid point of every thing going on here and the go-to tester track you should listen to if you want to get an idea of whether or not you’d enjoy this.

Overall; this is definitely one of the band’s better albums in terms of sheer song quality, riffs, memorable choruses and big hooks. Its not their most traditionally Power Metal release ever but isn’t so far away from the formula that it would be off-putting either like some of their albums **Cough**Tinnitus Sanctus**Cough** (and what it lacks in that department it makes up for in creativity and fun). The orchestral addition adds a lot, and the production is humongous.

Ps. If you can, try and get the version with bonus tracks so you can hear Kreator’s Mille Petroza join in on ‘Mysteria’ as well as the bonus track ‘Children Of Steel’ which is one of the most traditional Heavy Metal songs the band have written to date.