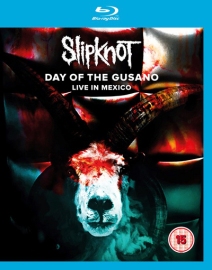 ***This review is regarding the single disc, UK Blu-Ray version only. Which contains the full uninterrupted concert only, with no special features or documentary footage.***

Now, you might be thinking ‘I’ve already got three Slipknot videos with concert footage on them’ if you already own Disasterpeices live in London from the Iowa touring cycle, (Sic)nesses live at Download festival 2009 on their first headline performance there during the All Hope Is Gone touring cycle, and the 2nd disc of the documentary release Voliminal Inside The Nine which had a smattering of live tracks from different dates and locations during the Vol. 3 touring cycle.

So what has Day Of The Gusano got to separate it from the others and make it worth buying as well? Well; first off, it is their first official concert video with the new rhythm section of Jay and Alex on drums and bass. Its their first ever show in Mexico City and the fans are energetic and grateful. Its their first video of a Knotfest performance and features all the associated spectacle and backdrops. It has songs from the .5 The Gray Chapter album, which obviously none of the previous videos will have had.

Comparing it to their other DVDs, there are 11 songs here that aren’t on Disaterpieces, including the rarely played ‘Metabolic’ off of Iowa, and ‘Me Inside’ & ‘Prosthetics’ off of the debut. There are 6 songs here that aren’t on (Sic)nesses at Download ’09. Compared to Voliminal‘s concert section, well, its a full length concert in a single location not just 9 random tracks from various locations, and none of it is in black & white.

So, onto ‘Gusano itself. (If you didn’t know already or bother to google that, its Spanish for ‘Maggots’ by the way, which makes sense, since y’know, they call their fans ‘Maggots’ and its filmed in Mexico). The audio visual quality of the release is really high. The picture quality, camera work, variety of shots, editing and general watching experience of the concert are the best that Slipknot have had to date. It is beautiful to look at, and there’s nothing distracting or interrupting about the editing. The performance visually has lots of pyro and fireworks and big backdrops and set pieces, fancy lighting. There’s  generally lots going on up there on stage… its big and flashy and never boring.

The mix and production are very good. The only niggle is that Corey’s vocals are a bit lower in the mix than any previous live efforts from the band, but that’s real nitpicking. Otherwise, the instruments are really clear and well balanced, you can make the kick drum out clearly in all situations, and its even easier to hear Craig and Sid’s stuff than usual too which helps you notice them a bit better. If there’s a key riff or drum fill or whatever its given priority and generally its all beefy, heavy and just plain well put together.

The band themselves’ performance will always make or break a concert though. All the audio visual quality in the world, with the most expensive fireworks and lighting can’t hide a crappy performance. Slipknot have been through different phases in that regard. Old bootlegs off of the first album cycle show them as a sort of messy raw jumble. On Iowa they were a tight well-oiled million dollar perfect live-band (I remember seeing them live in Belfast on that cycle and its still one of my favourite ever concert experiences all these years later). On Volume 3 they flipped between the two but generally they were let down by Corey’s vocals (both times I saw them on that cycle and indeed both their 9.0 Live album and Voliminal DVD from that cycle all suffered from Corey’s vocals not being as great as usual). On All Hope‘ however, they came back blazing and were incredible and put in career defining performances and Corey sounded like one of the world’s greatest ever frontmen.

Luckily, here, the band are really on top form. This is a fiery, energetic, fun performance that everybody seems into. There are no complaints about the new line up and they do a great job of trying to fill some pretty massive, childhood-defining, shoes. (Heck, Jay arguably plays ‘Vermilion’ better live here than on any of the other three officially released versions of it). The veteran members are all super practiced, tight and precise. Corey is really strong here, arguably the second-best that he’s ever been on an official release next to Download ’09. (There are some minor questions about that on ‘Sarcastrophe’ and ‘Prosthetics’ maybe, which are a bit sketchy perhaps, but for the majority of it he really, really nails it). Its also nice to see him making an effort to speak Spanish which he does rather a lot and appears really humble and grateful.

The one bit where all Slipknot concerts drag is during ‘Spit It Out’ when the band get all the audience to squat down so they can all jump (the fuck) up at the same key moment. The actual process of cajoling them all to squat down can be a bit boring to watch or listen to if you aren’t actually there yourself sometimes, but luckily here it really doesn’t drag on too long and they payoff is great; the image of the gigantic Mexican crowd all bouncing in unison is really rather impressive.

So just to go through the list: It looks great. It sounds great. The band play great. The setlist is different enough from previous live releases to be worth it. That setlist itself is also pretty great, doing a good job of pleasing fans with the songs they’d expect to hear (Old fans could never see a set without ‘(sic)’ or ‘Surfacing’ and newer fans would never accept a set without ‘Duality’ and ‘Psychosocial’ for example) with pleasing them by spicing things up a bit and not just repeating themselves every time. On a personal note as well, its just so damn nice that they played ‘Metabolic’ live. I’ve been banging on for years about it and how its my favourite Slipknot song and they’ve finally put it out on something. I’m very pleased about that. Underrated song!

Anyway, that’s just personal preference. Everyone has their pros and cons to any setlist by any band. I’m sure some people are gutted ‘Sulfur’ and ‘Left Behind’ are missing considering they were big singles. I myself am kind of surprised ‘Skeptic’ is missing. With its catchy-ass chorus its absolutely built for big audience sing-alongs. I’d have thought that would be in every live set ever following Paul’s death, but I guess maybe its too personal for them lyrically or something like that.

Overall; this is a damn fine release from the band and not one to miss out on. Not even if you’ve already got a lot of live material by them already, as discussed at the beginning. Its probably their best video album on purely video terms, and its really worthy of inclusion in your collection in the other aspects like tracklisting and performance. If you are desperate to see the documentary, don’t get this version, but if you, like me, only really want the concert then this is the perfect version (at the lowest price).