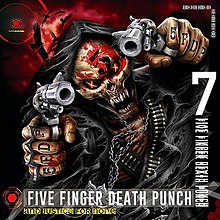 Five Finger Death Punch albums are often fairly similar in terms of quality, musical direction and performance. Most of them feature bouncy groove-metal riffs balanced with melodic modern-metalcore loud/quiet dynamics and easy on the ear radio friendly production jobs. Maybe a ballad or two for variety.

Not all their albums are absolutely identical, and for example their debut is faster and rawer than their fifth album, but there is a general similarity between a lot of them and the basic rule of thumb is that if you like one of them, you’ll probably like them all. They do have a distinct formula if we’re being honest here.

For me, their first two albums and also Got Your Six are the strongest, and up until this point, The Wrong Side Of Heaven’ 2 and American Capitalist are the weaker ones in the catalouge, as there are possibly too many ballads and light tracks on them and not enough fast songs for my own personal tastes, but to be honest that’s all if you are getting nit picky and there’s not too much difference between them unless you sit there and analyse them.

In 2018; two years after it was actually recorded due to some record company shenanigans and legal wranglings and after a gap filling greatest-hits compilation, the band released their seventh full-length studio album, And Justice For None. You can get it in a standard edition, or one with the new songs they added to that aforementioned greatest-hits albums, the catchy single ‘Trouble’ and the cover song ‘Gone Away’ which is a reworking of a The Offspring song (which to be fair they put on the standard edition anyway in the end), as well as two further bonus tracks from the same era, ‘Bad Seed’ and ‘Save Your Breath.’

Now; remember when I said there’s too many ballads and lighter moments on the albums I’d rate as being not their best? Well, this one has two lighter songs that are both covers. It also has the ballad single ‘When The Seasons Change’ preceded by the very good but still ballady ‘I Refuse.’   It even ends on a power ballad with ‘Will The Sun Ever Rise?’ It also has the strange lighter electronic tracks ‘Stuck In My Ways’ & ‘Bloody’ which feel like a play to get on TV advertisements and are a lot lighter and less powerful than my favourite songs by the band.

Hey; I am no ballad-phobic caveman. I love power metal for goodness sake, where you can’t move for ballads. Its just, when there’s one very good ballad on an album, it is a nice piece of variety. When its like two thirds of the whole record it sort of weighs it down and they loose their efficacy. If it had only been say, ‘I Refuse’  for example, that would be fine. If there was only one cover it might’ve been aright. If they only had one song experimenting with electronics, it would have stood out. As it stands, its all a bit too much and it feels like overkill.

There are some groovier, heavier and faster tracks here. ‘Rock Bottom,’ has a rumbling menace to it, ‘It Doesn’t Matter,’ ‘Fire In The Hole’ and ‘Top Of The World’ are the traditional Five Finger Death Punch sound and the opener ‘Fake’ is pretty strong. There’s stuff to like here for sure, don’t let me make you think its a complete departure. I guess the album is a bit overlong though, and a bit unfocused. It also hits the strange ‘make-your-mind-up’ sweet spot between staying too close to the old formula at times and experimenting with new stuff too much, without really committing to either. The problem is that they don’t really suit the new stuff. Again, ‘Bloody’ is an excellent example of what I did not expect from this band. Another song that doesn’t sound like the band is the controversial lead single ‘Sham Pain’ with its lyrics basically complaining about being on tour and sounding ungrateful.

When I first got this album, it really felt like a let down after Got Your Six, and I will admit that it has grown on me a lot more with each repeat listen. If I hadn’t bought it and felt guilty about the money, I might not have listened to it quite so often and allowed it to grow on me. Even with this appreciation-raising slow burn, this is easily my least favourite album from the group. It may be due to the circumstances in which it was written and recorded, burned out and before getting clean and with the record label woes, it may have all impacted upon the quality of the record. Maybe the next one will be great. Or again, maybe its just a natural dip from a band working that hard pumping albums out and touring so often. They dipped a little on the fifth album and rose higher again on the sixth. Maybe it is just a natural fluctuation. Either way, while I am still going to be listening to this album in full over and over again to try and feel like I got my money’s worth, I feel like I won’t ever like it as much as Way Of The Fist or Wrong Side Of Heaven part 1. If you aren’t an obsessive fan, don’t feel bad if you want to skip this one, and if you are a new fan or aren’t a fan yet, I’d advise you leave this one until last, and try something like War Is The Answer first.