Here are some songs that are totally floating my boat at the minute, check em out, find a new song to love and support the band accordingly if you do. 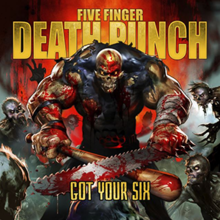 Dependable as always, the American Heavy Metal band Five Finger Death Punch return in 2015 with their sixth full-length studio album, Got Your Six, showing no signs of fatigue, letting-up or diminishing returns. The band have released another barn-storming collection of stompy, groovy, catchy melodic Metal equally as high in quality as the best of their existing discography to date.

Five Finger Death Punch are the kind of slow-evolution band that don’t mess with their formula too much, if you liked their previous albums then you’ll love this because its pretty similar sounding, but with enough of a twist that it doesn’t get boring. Its not suddenly a jazz record or a dubstep album, but that doesn’t mean you’ve heard it all before.

The production job by Kevin Churko is excellent as usual, the man just gets this band and how they should sound. The musicianship is strong, with the lead guitars better than ever, singer Ivan Moody stretching himself and exploring new vocal ground, and the rhythm section delivering the same kind of powerful post-Pantera stomp the band is known for just that little bit better. The drums are a little bit more flashy, the structures are a little bit more advanced, but it still grooves. Performance-wise this record is one of their most intense and exciting performances since their debut album, there’s a renewed enthusiasm and a bit of a harder edge than the last two or three records… its just got a little bit more of an umph.

Highlights include the excellent and varied Title Track, as well as the fun and fast-paced ‘No Sudden Movements’ which has a different feel than you’ve heard from the band before, as well as the very fun ‘Boots And Blood’ which is honestly one of my favourite songs the band have come up with to date. There’s also a fun little acoustic guitar solo in the middle of ‘Question Everything’ which is a delightful surprise and makes it stand out on the album.

Sure, the artwork is cheesy and the lyrics are adolescent (even I can’t defend them), but when the music is this good, the songs are this catchy and it sounds like a million bucks… who really cares? This is a damn strong, damn entertaining and completely reliable band, and Got Your Six is among the best of their output to date. If you hate them on principle it won’t change your mind, but existing fans need not hesitate for a moment – Got Your Six is excellent and worth a place in your collection without question.

If you can, try and get yourself a copy of the edition with bonus tracks by the way, because for my money, the bonus tracks are even better than the majority of the album… more in the direction of The Way Of The Fist; ‘You’re Not My Kind’ in particular is an excellent song and one that draws my attention. If there’s a negligible price difference, opt for that version.