I went to go and see Corrosion Of Conformity live in Cardiff Uni Great Hall last night (Saturday 03.11.18), supported by Orange Goblin and Fireball Ministry. A pretty good bill for Stoner Rock fans. I’ve been having a wall-punchingly, burst out in tears, sleeplessly dreadful week at work even though this should be one of the best weeks of my life due to a pregnancy scan earlier in the week, and getting to go see C.O.C seems like the perfect stress release. I’ve been playing Live Volume repeatedly all week in anticipation.

C.O.C have over the years become one of my absolute favourite bands. There’s always certain bands at the start of your musical life, in your teens and such, that get stuck and become a favourite forever by default, but C.O.C, along with Queensryche, Helloween and Manowar have been absolutely defining my musical landscape as an adult. If I picture in my mind’s eye the best albums of all time or albums I want on my wall as decoration Deliverance and Wiseblood and America’s Volume Dealer are always there. One of my favourite photos of me and my wife together has me in a C.O.C shirt. My metal jacket has a C.O.C patch right on the front in one of the three most important spots (the back is Helloween and the other prime spot is Pantera in case you were wondering).

I have seen C.O.C twice before, once this year at Download Festival 2018 (quite a short set) and once before in Manchester Academy on their
Deliverance Revival shows where Pepper returned to the band (one of the best concerts in recent memory). I remember thinking after Download when they’d only played one new song, that I would really love to see a concert as long as the reunion one, but with more songs from their real grower of a new album, No Cross No Crown.

Speaking of Clutch, they played some Clutch over the PA in between bands. Good taste.

Anyway; I also saw Orange Goblin once before supporting Down in 2012. I remember thinking they were good but hadn’t totally won me over. I never did get around to checking a full album out. Fireball Ministry are new for me.

So now onto the evening itself; I turn up to the gig, que for about 10 minutes and then doors open. There’s only about 15 people in the que. We get in. The merch stand isn’t there like it has been for the past few gigs I’ve been to at this venue. Hmmm, surely they sell merch right? Oh ok, they put it right in the hall with the band. Previously it had its own dedicated area outside. The merch is crazy cheap. I think my Guns N Roses t-shirt from Download cost me about 30 quid. The C.O.C merch was so low priced I got 2 t-shirts for £25. Bloody bargin! I got a No Cross No Crown one and a general C.O.C skull logo one. I wanted a new C.O.C shirt to replace my Deliverance Revival one which had been my favourite shirt for about 3 years but now has the deadly combination of being shrunk in the wash and me haven gotten too fat, so it just looks ridiculous on me. I’ve still got a trio-lineup C.O.C shirt that fits though, wore that to gig tonight actually. (Oh, and I got to wear my jacket, which I am always excited about, and no one even stole any of the patches because they’re a lot better secured after the last incident).

Anyway, while I was getting the merch, a familiar sound was playing in the background. Was that Fireball Ministry? I thought I didn’t know any of their songs?

Oh. Would you look at that. Actually; Black Moth are on the bill and I didn’t even know. I like a bit of Black Moth. I haven’t thought about them in a few years, but I remember liking their debut album  back in 2012. (2012 was the first year I saw Pepper Keenan live actually, in Down, back when C.O.C were still doing the trio line-up without him.)

Black Moth were pretty cracking tonight. They played nice Sabbathy groovey Stoner Metal with clean vocals and a very enthusiastic drummer. The drummer looked like he has having great fun and I really dig that. He also looked very similar to C.O.C’s fill-in drummer John Green (to the point where I had to google if they weren’t the same person). I have nothing but good things to say about them. Their singer seemed really grateful and she kept thanking everyone.

Next up after a pleasantly short wait, were Fireball Ministry. Man. Their drummer hits hard. He is a big bouncer looking Kirk Weinstein kind of guy and he beats the absolute shite out of his drums! The man hits hard. The singer kept trying to get everyone energy up but the thin crowd didn’t seem to want to move or make much noise. Also, what was up with this tiny crowd. C.O.C got a tiny crowd at Download un-befitting of their status and quality. Was it happening here again tonight?

The Fireball Ministry guy kept telling everyone to be louder but it wasn’t really happening much. By the end of their set though, they won me over with their melodic choruses and they said it was the best night of the tour for em, so maybe the audiences have all been this sleepy.

Then came Orange Goblin. Or ‘Orange-Fucking-Goblin, baby!’ to give them their preferred title. Their singer burst on to stage like an affable hurricane. He was full of grins and cheeky expressions but an absolute presence on stage, swinging fists and spitting clouds of water and using the mic stand as a pretend guitar and actually getting the crowd riled up this time. He really pumped the energy in the room up 200%.

I remember that the last time I saw this band it was ok, but didn’t make me want to explore further. Not so this time. They were a bloody revelation this time. So powerful, so much energy, such a good vibe off of them. Their friendly but intense singer just absolutely commanded the room, and they have a speed (which he said on stage was influenced by Motorhead) that a lot of Stoner bands are missing. Some Stoner bands worship Sabbath and only Sabbath, but hearing Sabbath through a Motorhead filter was a lot of fun tonight. There was also an amusingly British moment when the singer announced that the next song was ‘The Wolf Bites Back’ and the lead guitarist said ‘Not yet he don’t’ at which point the singer realized he had missed a song. He then made a joke about it when it was time to actually play that song, and got a better laugh out of the crowd than a lot of comedians I’ve seen live. Orange Goblin definitely made a very good impression on me and I think I’ll definitely be getting some of their albums in the future. 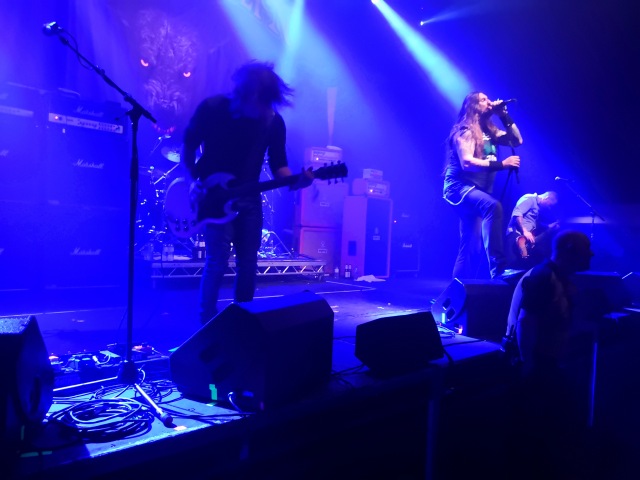 Anyway; that was the warm up. Time for the main event. Yes. It was time for C.O.C. Now; as I’ve said before, C.O.C are one of the most important and favourite bands of my adult life, and the first time I saw them live was a religious experience that few gigs could rival. Them only playing about 4 songs at Download to an unenthusiastic crowd of Babymetal fans was a pretty different gig experience. But hey; its their own gig this time. With people who know the score. Some woman ran up to the barrier and started screeching hysterically in a Beatlemania kind of way, for like the first four whole songs. And hey, it had filled up a lot since Fireball Ministry were on. It almost looked as full as when I saw Saxon or Mastodon here. Thank goodness it was so quiet at the start actually, because I was able at the start to just walk right up and stand immediately at the barrier and wait for this moment. Unlike the screeching woman who had to fight tooth and claw to get a good view. Man. This was a goooood view.

Up close and personal

I was right in from of Woody Weatherman (a brilliant showman with all his gesturing and stage moves) with a perfect diagonal view of John the drummer and Mike Dean and Pepper Keenan. I could literally see every hit of every drum and every note of Woody’s guitar, and a pretty excellent view of the bass and vocals. I think this is one of the best views I’ve had at a gig ever. Maybe its because the stage is low to the ground? (Orange Goblin’s singer was able to touch a crowdsurfer from the stage and rustle his hair up). Also maybe it was because all the crowd-surfing happening stage left and me sat at stage right was unmolested all evening. Man I love comfortable gigs. You can keep your 1980s hardcore punk face punching gigs, give me a good view and a good sound any day, especially if it is with no one hitting you in the head. 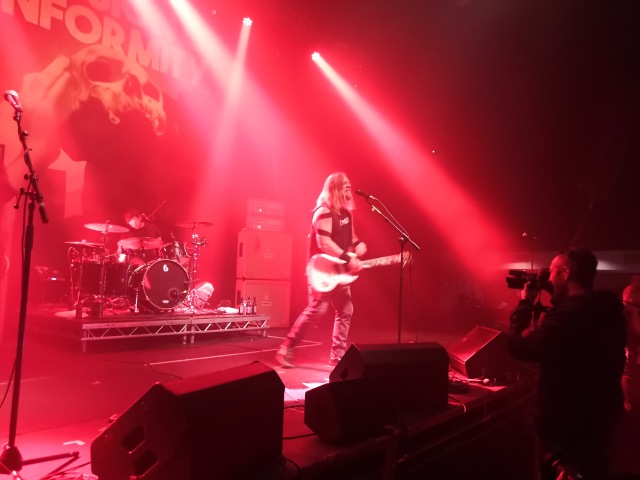 The set-list was pretty great. The hits from Deliverance. Vote With A Bullet from Blind. Wise Blood‘s title track. 3 new songs off of No Cross No Crown (which were absolutely savage live by the way, they sound even better and rawer and heavier live! – ‘The Luddite’ was crushing and ‘Forgive Me’ was even more energetic than the studio version) and hey, 3 songs from my favourite C.O.C record, the immensely underrated America’s Volume Dealer. I guess I chose the right night to see ’em. ‘Diablo BLVD’ was such a top of the lungs sing-along for me, as was ‘Who’s Got The Fire?’ – I think the only thing I would change about the first time I saw this band was that there was not enough Volume Dealer. Now I’ve had my fair share. Bloody loved it too! 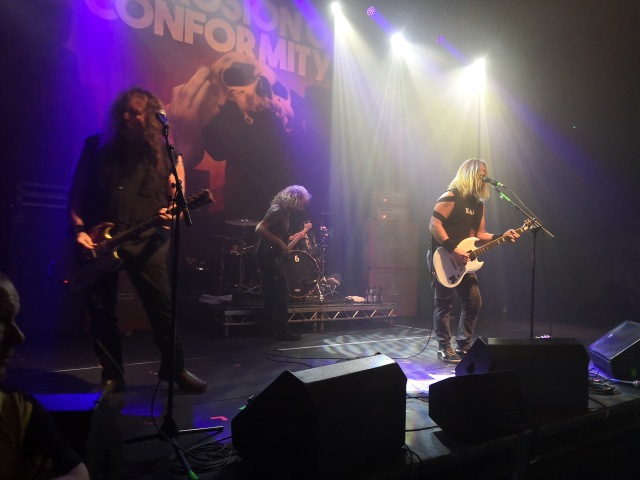 I feel like they maybe played less than Orange Goblin, but maybe ‘Goblin have shorter songs. Or maybe time flies when you’re having fun. Or maybe they ran out of time. The houselights after-all did come up and they almost didn’t play an encore but then people chanted and they did the last one (‘Clean My Wounds’ – with extra jamming) with the house lights up, after asking if the power would not be cut from the amps. It actually looked really cool with the lights up. I wonder if they did it on purpose actually?

Anyway. That was my lot. What a concert. Bonus Black Moth I didn’t expect. Cheap merch prices. A very entertaining Fireball Ministry first timer and a strong new interest in Orange Goblin. And best of all; C.O.C played an utterly fantastic gig and reaffirmed themselves as one of my favourite bands of all time. They are just such a really special band, and its great to have them deliver so well live. I just had a brilliant time.

I won’t have to wait long for another gig. Monday night sees the mightly Slayer rolling into town for the last ever time. I’ll let you know how that turns out too. ‘Til we meet again…